I recently updated my Twitter profile, to cover not just ‘Kate the STEM Enthusiast’ but also other interests of mine.  I’ve always been wary of talking about what production I’m performing in, or about the latest Vivo D’Arte events, because it could look like self promotion, but following two recent meetings, I think I’m coming round to the idea that the we are not only happy to see the ‘real’ people behind the image, but we have come to expect it.

The first meeting was with Jon Ingham at the Teneo Conference on Recruitment in Engineering and Technology in Frankfurt in June.  There was much discussion about whether a personal message from a CEO can have more influence on attracting the best recruits than the traditional corporate statements.  The conclusion reached was that it could … as long as the CEO was a naturally good communicator. And Jon, with expertise in Human Resources and a social networking enthusiast, tried to persuade me that it is the norm to tweet as a ‘whole person’ rather than feeling you have to keep ‘work’ and ‘life’ separate.

The second conversation was with Lee Dryden of Siemens Corporate Communications department while I was doing some filming for them. He introduced me to the idea of social networking being a conversation, and, as in non-virtual situations, you converse about a range of topics and interests.

So why has it taken so long to take down the barriers between my ‘work’ persona, and the other parts of my life?  Well, I have already put some pictures of my stage appearances on my website, but that could be seen as strategic promotion for my work.  And in the last three talks I’ve given to schools, I’ve made a point of saying that if you become a scientists, you don’t have to live in the white coat the whole time – you can still be you, with your other interests and activities.  You are not expected to renounce all else to become a serious scientist.

I think the reason I’ve been wary of tweeting about the ‘other stuff’ is because of a nervousness about not being taken seriously.  In the same way that Academics who venture into TV or popular science used to be worried about losing credibility with their colleagues and superiors.  But if you look at the people I most admire such as Mark Miodownik and Athene Donald, they manage fine.  I listened to Athene on ‘The Life Scientific’ with Jim Al-Khalili while I was running last week, and I was reminded why I enjoy her blogs so much.  Meanwhile Mark is achieving great things through his ‘Institute of Making’, while Mark himself happily speaks out on issues that are important to him.

I also wonder if my hesitance comes from an out-dated view that women will only get on if they pretend nothing else matters to them other than their work.  If that is the case, I’ve been my own worst enemy, and I have a duty to set a better example.

So, I am, gradually, turning over a new leaf.  My tweets still include information on STEM education and careers, but also the places I’ve been and the people I’ve met, such as Redland High School and the Siemens Crystal. And increasingly, information about other projects I’m involved with from Vivo D’Arte to Harrow Opera and the Hemel Hempstead Theatre Company. 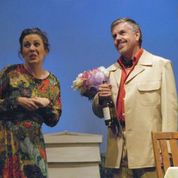 But I will also try to be more conversational – asking questions, bringing articles to particular people’s attention, and responding too.  So, any ideas how to promote a brilliant new modern day production of ‘Don Giovanni’ in English at the Compass Theatre in Ickenham in October would be gratefully received.

However, I will restrain myself from telling you which toppings I’m having on my pizza – there is a limit!