Finding something you weren’t looking for

If someone calls you a Geek, how do you feel?  How about if they call you a nerd?  Well this Venn diagram really made me smile.  I picked it up on twitter from @athenedonald who had been sent it by @jimalkhalili. 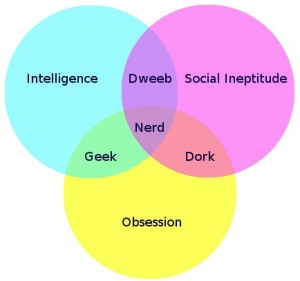 So perhaps that explains it – social ineptitude is hardly a compliment, whereas intelligence probably is, and obsession … well, we can live with that. I didn’t go looking for this mathematically represented definition, but I love it, and I will use it in my talks in future.

It’s reminded me what I like so much about twitter.  I tweet purely for work, sharing views on engineering education and the like rather than  discussing my choice of pizza. The people and organisations I follow are like trusted friends, even though I haven’t actually met many of them.  They have similar interests, and often open my eyes to things I hadn’t seen, or hadn’t thought of before.  The ‘old fashioned’ way of using the internet was to go and search for something – I still do that for specific information.  But in the last couple of years things have changed.  Like the ‘other customers bought’ section on Amazon, or the ‘Lists’ from other buyers, it takes you to other places you might not have thought of for yourself.  The difference with many of those I follow on Twitter, such as @ruskin147 (Rory Cellan-Jones) or @EdYong209 is that they are already trusted journalists, so I know where I stand with them and their tweets, whereas the person recommending a book on Amazon could be the author’s mother.

A lot of careers information, particularly for STEM, is based on websites.  You have to be looking for it to know it is there, or to be pointed at the site by someone or something else.  But if your self perception is that you wouldn’t be interested in that kind of thing, you are much less likely to go and look, even if what you’d find there might change your mind.

How can we use the new forms of social media to make sure young people and their influencers find ‘what they don’t know they are looking for’, without it being shoved down their throats?

I don’t know the answer …. but I know I’ve made some wonderful discoveries of things I didn’t know I wanted to know via twitter like the Brighton Mini Maker Faire that I went to with my daughter, and catching up with @MaggiePhilbin’s TeenTech events.

If you want to follow me at @katebellingham, I do quite a bit of retweeting …. and no pizza, promise.