Only three days after visiting Hull, I was in Leicester to receive another Honorary Doctorate, this time from De Montfort University in technology.  Quite a different occasion – but equally wonderful, and equally fitting for the graduating students and their family and friends.  This time I took along my husband and my niece called, slightly confusingly, Katie Bellingham.  (At least it wasn’t her sister-in-law who became Kate Bellingham when she married my nephew a few years ago.)

So, in the briefing call, they had confirmed that I should feel at home as it was to be held in Curve, the new theatre in Leicester.  When I got there I realised how huge the stage there is – no cramped university dignitaries squashed shoulder to shoulder here, and behind us sat the  graduands and diplomats on tiered seating, in full view of the audience.

And how theatrical was it?  Well, we processed in to ‘Zadok the Priest’,  (I refrained from joining in, though I have sung it several times), had the Gospel Choir perform a spellbinding version of ‘Hallelujah’ (Leonard Cohen’s version, not Handel’s chorus from the Messiah) and processed off to Take That’s ‘Greatest Day’.  And in the midst of it all, we had a video of the highlights from the DMU year, including their Royal visit.

And, if that wasn’t up-to-the-minute enough, by the time I was back in the robing room to hand back the stunning gold and rose-gold gown, the official photos were already framed and ready for me . 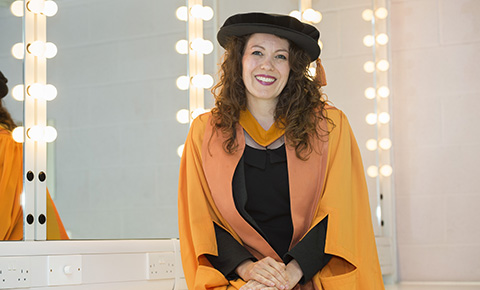 It all came over as a highly relevant event for a forward thinking educational establishment.   Once again, I’m delighted to have established an ongoing relationship.  That brings the number of universities with which I have a special connection to 7 – the two I have attended (Oxford and Hertfordshire) and now 5 who have given me honours, Staffordshire, West of England, Kent, Hull and De Montfort.  It’s a great way for me to keep my finger on the pulse of education – without having to remain an eternal student!