I have a dilemma.

Last month I was awarded an honorary doctorate in science by the University of the West of England. I’m hugely proud to have received this in recognition of the work I do promoting science and engineering opportunities to young people, and I had a great day in Bristol with my family, including the chance to speak from the pulpit in Bristol Cathedral. 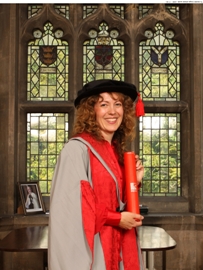 But back to the dilemma …

Should I use the title ‘Dr Kate’ as a sign of respect to UWE who conferred the honour, and as a conversation starter to talk about both the university and about my STEM work?

Or …. should I decline to use the title out of respect to those who work long and hard to achieve the accreditation in the more conventional way?  I have recently been on my annual extended family holiday, and included in the party of eleven were three ‘real’ doctors – in history, geology and physics – so I know how much work is involved in getting the ‘real’ thing.  (One of those is my father who got his doctorate as a very mature student about the same time I got my MSc as a mature student in 2004).

I have, in fact, faced this dilemma before.  I received an honorary doctorate in Technology from the University of Staffordshire back in 1997.   My decision then, which I’m going to stick with now, is to not use ‘Dr’ as a title, but when it’s appropriate to include it in post nominals, clearly marked as ‘hon’. I hope that is a suitable compromise.

It was my father (the aforementioned Dr Bellingham) who recently asked “But what do you actually DO?”  He was enquiring about my work, and hadn’t really got the hang of the ‘portfolio career’ I had taken up.  Still rather non-plussed, he rephrased it “Well, what does it say on your business card?” In fact my business card just has my photo and my email address, but I told him if it did include a ‘job title’, it would probably be ‘Engineering Enthusiast’.

It is in that capacity that I am appearing as a ‘talking head’ on James May’s Things You Need to Know …. About Engineering on BBC2 on Monday 10 September (#JMsTYNTK). I spent a long time thinking what it should say in my caption with my name.  After all, who am I to talk about all this stuff?  Just someone who is genuinely passionate and wants to share that passion as widely as possible.

It was slightly surreal hearing Dr Catherine Hobbs (definitely a ‘real’ Doctor) reading out an oration with the things I’ve done over the years.  In many cases, I’ve simply taken advantage of opportunities that have come my way, from Tomorrow’s World to President of Young Engineers to being an Ambassador for the BLOODHOUND Engineering Adventure.  One of the most telling moments of the whole graduation was when the appropriately gowned great and good of the university were lining up; I was deep in lively conversation with Professor John Lanham about new project ideas for engineering outreach, and we finally had to break off to process respectfully into the cathedral.

So thank you to UWE for making my family so welcome, even if my 14yr old didn’t really enjoy having to wear a tie during the school holidays. Thank you for the opportunity of new and active links with the university and the city.  And thank you of course for the honorary doctorate.