Trying out being an ‘Engineer in Residence’

The background to all this came from discussions when I was working on the Elite Engineering Programme with the Royal Academy of Engineering. We talked a lot about the best ways to support schools, teachers and potential engineers, and we recognised that there is often no one in a school to ‘champion’ engineering – after all teachers have plenty to focus on already, and while they may have an interest in engineering they may not have much experience, and when the pressure is on, they can’t make it their priority.  So wouldn’t it be great if there was a STEM Ambassador for every school who could take that role?  Two of our group, Peter Goodhew and I offered to pilot the idea with local schools.

So how have things gone after a term and a half?

Well, the first thing to point out is that I took the easy option and found a school which already has several champions for engineering, simply because I knew the door would be open for me to come in and help.  Also, I would be able to learn from the way they have been very successful in their robotics club and their Engineering BTEC courses.  However, a disadvantage is that it isn’t actually that local to me – it’s an hour drive each way, or longer at rush hour.

The second thing to mention is that this school already has two excellent engineers in residence in Jenny and Dave Smith from MBDA who come to the school’s robotics club once or twice a week. In December, there was recognition of the school’s achievements and the contributions of Jenny & Dave by the Institution of Mechanical Engineers.

And what have I done?

– I’ve helped write an application for a Royal Academy of Engineering Ingenious Grant.

– I’ve made the school aware of a number of engagement activities, some of which they’ve taken up

– I’ve given advice on a variety of ways the school can encourage more girls to choose subjects that keep the doors to engineering open.  This includes keeping the SLT STEM lead in touch with publications and reports (eg the Institute of Physics ‘Closing Doors’ report) as well as resources & activities available to them (eg the Rolls Royce STEM video)

– I’ve created a self study activity that can be used for homework or ‘end of term’ lesson to help students investigate Labour Market Information for STEM related jobs in the local area.  They can then create posters highlighting local companies and careers which can form a display for other students

– I’ve led a session on STEM Careers for 80 girls from Years 8 and 9 in preparation for  their GCSE subject choices, and led a workshop onfemale STEM role models

This final activity has taken by far the most time, involving lots of reading, numerous emails and visiting the school once a week, including taking my daughter over during half term.   But it paid off.  At the regional tournament in Duxford, the Femgineers won the ‘Rising Stars’ trophy for the best new team. 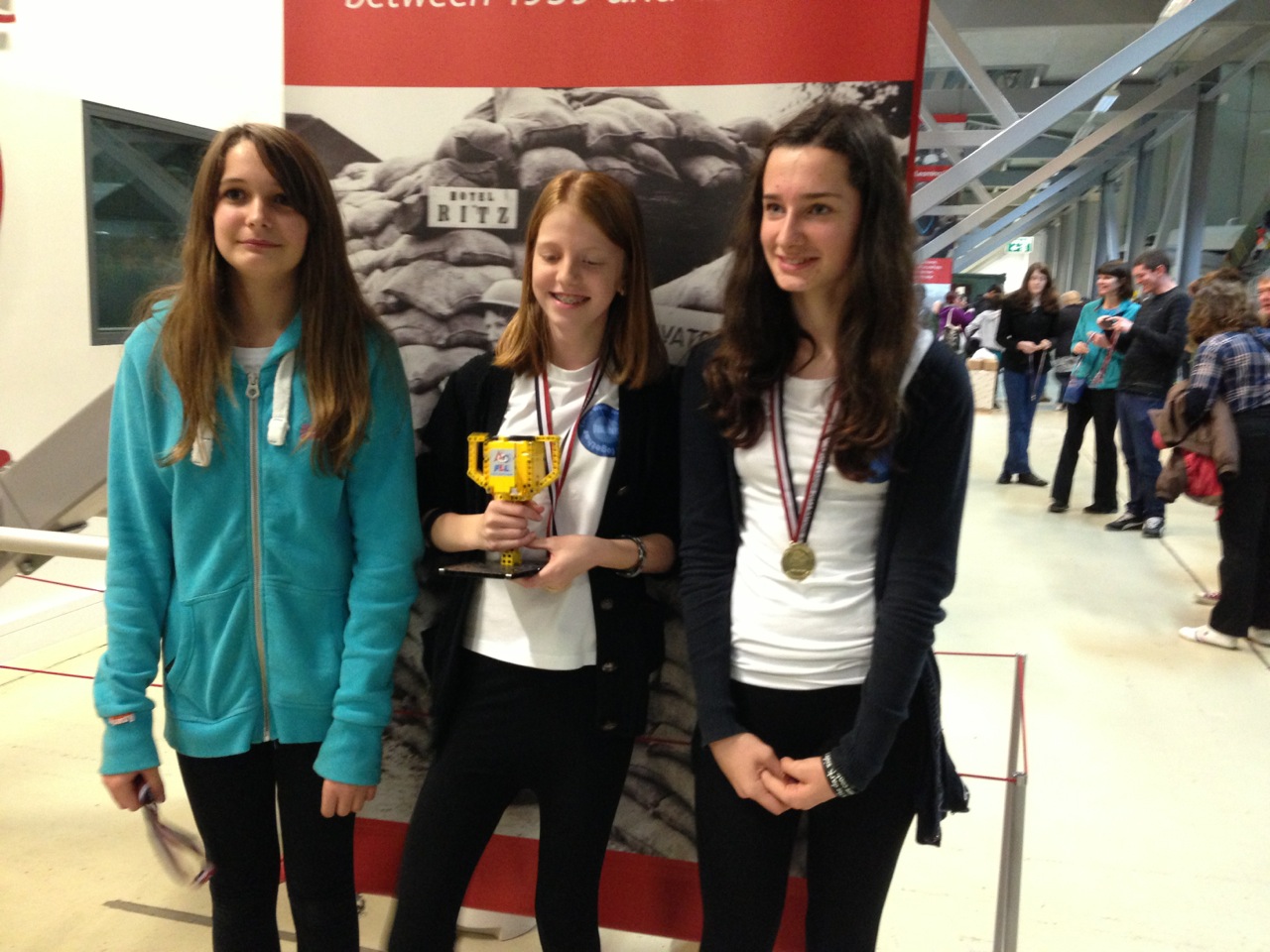 Have I achieved what I set out to do at the school?  Not necessarily, though I’ve certainly learned a lot.

– The school already has a female teacher for the BTEC Engineering, and another female ‘Engineer in Residence’ so there are already clear role models.  But if there hadn’t been, my presence would have made a difference.

– It is easier to add value when working towards a specific event.  With the year 8/9 girls careers session, everyone had a sense of purpose – the girls, teachers and me.

– It is best to work to my strengths.  I ventured outside my comfort zone with elements of the FLL preparation.  However, I am much more familiar with careers materials, grant applications and general networking. These are areas where I have experience, so I probably have more to offer.

– Quality is more important than time.  A new engineering block is due to be finished this summer and the Head would like to see it used by the local community at evenings and weekends (like their Sports Centre).  If I could put them in touch with groups who could make good use of that opportunity, whether through the Hertfordshire Chamber of Commerce, the local IET representatives, Young Engineers, or any other of my contacts, that is much more useful than spending hours going over every Saturday to run something myself.

My conclusion is that an ‘Engineer in Residence’ relationship is definitely beneficial for both school and volunteer, and if that can be a long term relationship, there is time to explore what is best given and gained.  I chose to take part as an individual – the model of a school linking with a company may not build such a personal relationship, but could be even more helpful as different employees can support different activities.