What is it with Physics?

‘I was seriously worried that physics would disappear from the curriculum’.  The words of an experienced physics teacher I met last week, on watching the fall in numbers training to teach the subject.

The ongoing shortage brought me back into the classroom last week. A school has suddenly got a physics teacher on long term sick leave, and are looking at the options for cover so I went in to meet the staff, including the teacher with the gloomy message.

I was both terrified and excited at the prospect of standing in front of AS level students and introducing them to the photoelectric effect.  I’m still dining out on the ‘wow’ I got from the demo.  I’m used to ‘wow’ from my 9 – 11 year old primary STEM club, but it was a particular pleasure eliciting this from teenagers.

A few weeks ago, I was at the Institute of Physics discussing the low numbers of girls taking A level physics. Days later I met a teacher in Liverpool with no shortage of girls taking the subject.  I asked what her secret was, and she pointed out that in many schools the physics specialist only does A level or KS4, but at her school they had physicists teaching KS3 as well.  Perhaps the confidence and, more importantly, the passion for the subject is engendered at that age, which encourages students to be open to post 16 study?

But wouldn’t that impact on girls and boys equally?  I have no evidence (and anyone who knows me will know I would always prefer to use evidence rather than anecdote) but the suggestion is that generally girls are more susceptible to the way a subject is taught than the boys, who connect more directly with the subject itself.  My personal anecdote to support this is that, as toddlers, my daughter was very bothered about who was looking after her, whereas my son only cared if there were good toys to play with.  But as I say, I have no evidence of toddlers or the influence at KS3 – I’m just throwing it into the pot.

Could there be a specific role for STEM Ambassadors to focus on helping share their passion for physics, not just in the ‘tricky’ stuff at A level or KS4, but back in KS3?

Whether I’m suitable to help out at the school I visited or not, I hope the students picked up on my enthusiasm.  After the formal demo of the photoelectric effect ….

…. I showed them a youtube video of how to make their own demo kit with a drinks can, some tinsel, a balloon and a UV light used as a ‘hand sanitizer’.  If anyone made one at home, I’d certainly say ‘wow’ to that. 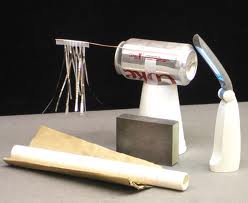 Finally, having been a geek for a week, here’s a UV joke …